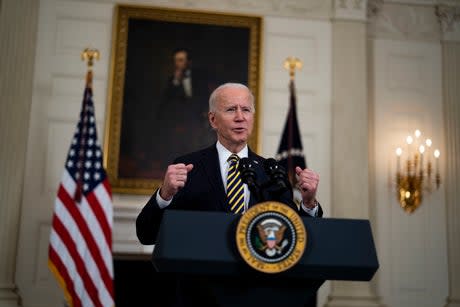 ABCWhite House Press Secretary Jen Psaki pushed again in opposition to The View’s Meghan McCain on Thursday over accusations of “hypocrisy” surrounding the Biden administration’s use of detention services to accommodate migrant kids. The present scenario is “absolutely not” the identical as “kids in cages,” Psaki insisted.Earlier this week, it was reported that the Biden administration had opened its first migrant baby facility on the border. The non permanent facility, which had been shuttered beneath the Trump administration following backlash over the controversial zero-tolerance coverage of separating migrant kids from mother and father, can be used to carry as much as 700 kids aged 13 to 17.The administration, in the meantime, has confronted criticism from throughout the political spectrum over the move, with conservatives particularly charging President Joe Biden with hypocrisy on account of Democratic complaints in regards to the earlier administration’s remedy of migrant kids. The White House has contended that the 2 conditions should not the identical and they don’t seem to be replicating the Trump administration’s immigration insurance policies.During the press secretary’s View look on Thursday, McCain primarily parroted the identical questions Fox News reporter Peter Doocy requested Psaki in regards to the services at a White House briefing earlier this week. “President Biden and Vice President Kamala Harris repeatedly spoke out against ‘kids in cages.’ I feel like this is the same thing, and that you’re still detaining kids at the border and it’s not meaningfully different than what President Trump was doing,” the conservative host said.“Absolutely not, Meghan,” Psaki replied. “We are not ripping children from the arms of their parents. That is horrible and something we saw in the last administration, but we’re seeing kids are fleeing prosecution.”“They’re fleeing really difficult circumstances in their home country and they’re coming to the border and we have to figure out how to treat them humanely and keep them safe, and in a time of COVID,” the White House spokesperson continued. “We had to have educational services, so we could have legal services and medical and health services and have those kids there treated humanely until we can find proper homes, family placements for these kids.”While co-host Sunny Hostin was about to leap in with a query, McCain interjected and continued to press Psaki on the difficulty.“I just wanted to know are you or are you not detaining children in a different facility?!” McCain exclaimed.“Well, Meghan, this is a facility that was reopened,” Psaki responded, sticking to her speaking factors. “It was revamped and it was redone to have these kids in a place where they could have access to educational services, health services so they could find proper homes. We can’t send them directly to families that haven’t been vetted. We’ve seen issues with that in the past.”McCain, for her half, went on to notice that the criticism the White House has obtained has additionally come from Democrats corresponding to Rep. Alexandria Ocasio-Cortez (D-NY), including that “a lot of people see this as hypocrisy” over the power use.“It’s sort of ‘potato potahto,’ it’s kids in cages or kids are being separated from their families. Kids are being separated from their families,” the View host continued.Psaki, for her half, tried to reconcile the distinction, noting that the Biden administration is now not separating kids from mother and father on the border.“This is a facility—and we needed to open a brand new one to verify now we have the protection protocols so as to deal with the COVID wants and the well being and security wants as a result of we won’t have as many children within the former HHS facility,” she declared.“That’s exactly what we did, but our objective is to get these kids into safe homes with their families as quickly as possible, and we are absolutely not doing what the former president did, and what frankly the current president and the current vice president objected to, which is ripping kids from the arms of their parents,” the press secretary concluded. “That is not the policy of this administration and not something we would do.”Read more at The Daily Beast.Get our top stories in your inbox every day. Sign up now!Daily Beast Membership: Beast Inside goes deeper on the stories that matter to you. Learn more.